I wanted to write a proper, detailed, honest review of the whole vegetarian/vegan situation in Laos. The time had come and I was excited to finally try everything vegetarian in Vientiane. Auste, on the other hand, has given up on Asian vegetarian food after our first week in Asia in general. But with my ongoing determination, we had a 48-hour vegetarian investigation in Vientiane. I kept a positive spirit for many months in Thailand, and hoped for a tasty retreat in Laos.

In Asia vegetarians/vegans are ‘jay’ eaters for religious reasons, and they do not use pungent ingredients such as garlic, onion or chilli peppers, which results in less than tasty food. And since they cannot eat meat for religious reasons, even though they may like the taste, they find ways around it – they use what I like to call SATAN. It is some sort of processed soy material which really looks, smells, and tastes like meat, as well as it has a chewy consistency. In many cases my friends were hardly able to distinguish between the real thing! So not many vegetarians in Asia actually like, or in fact eat, vegetables. To the contrary, Auste and I both do. Let’s check Vientiane out!

Just opposite the Thai Embassy, this farang-friendly cafe served good-looking cheese paninis (yaay!), but with Thai instead of proper Italian basil. And it’s just not the same. Thai basil gave the sandwich a slightly sweet liquorice taste, which says it all. The place itself was cosy, with some cakes available, free wi-fi, even computers for internet use. Sandwich prices were around 100 baht mark, coffee just over 50 baht.

Caffeinated, we headed to the Khua Din market next to the bus station to literally inspect a vegetarian buffet we read about online. Through strands of yellow flags indicating vegetarian/vegan (jay) food availability and past the counter with hot-plates of, ironically, lukewarm foods, we sat down all hungry and excited.

To no surprise, most of the foods looked very unappealing – overcooked, with little colour, or drowning in grease. These choices reminded me of typical cheap buffets in Thailand. Most of the dishes were fake meat-based (seitan/soy), some with tofu, and some with just vegetables. The fried noodles with tofu were probably the best, and by best I mean just passable. Regardless of the fact that all soy dishes had a very meaty texture and smell, they were lacking taste. Perhaps people of Asian background are used to the ingredients, but for me as a European, they are just too weird. For example, overcooked bitter gourd, in a watery bitter sauce. It reminded me of medicine. What I could enjoy was a fried egg and noodles. For desserts they had a Thai-style sweet syrup with coconut as I remember. Super sweet. Other things were basically stir-fries, fried “chicken”, fried “pork”, “beef” cutlets, etc. So personally, this buffet was very Thai and I didn’t enjoy it at all. If you’ve had such an experience, you’ll agree it’s not at all satisfying to fill up on bad-tasting food.

Slowly exploring the city centre we made our way to our hotel. Since we had been lugging our backpacks, we got hungry again. At first the ‘Golden Age Vegetarian’ seemed like a place we wouldn’t come back to: out-of-date décor, inattentive staff, and out of main ingredients. They do lunchtime buffets, hence lack of both clientele, and ingredients!

However, after we ordered deep fried tofu and a rice pancake, we knew we’ll come back here for lunch the next day. And they said they’ll have more ingredients for us. Score. The rice pancake in particular, was exquisite: warm, stuffed with tasty vegan egg stuff, with consistency that of an omelette. It came with a lightly spicy sauce, which went perfectly with the savoury pancake. We were full just off of that! Surprisingly, they were only 15,000 kip each (65 baht). They menu had lots of ‘jay’ meats and the cuisine seemed to have a Vietnamese/Chinese/Thai theme – very tasty.

We noticed many cars and bikes with dirty wheels – a sight in Bangkok you only see after a seasonal downpour. We figured that the reason may be the many ‘main’ roads that either have many potholes, or are actual dirt roads. This is good to bear in mind when using Google maps (main road on Google may mean a dirt road ahead of you).

On Rue Pangkham (opposite M-point mart) we found a sandwich stand I had seen before and we had a cheese-veg sandwich with a big Leo for 20 k. It was good…a proper white baguette with real cheese and fresh cabbage, carrots, in a pickled sauce. There are a few stands scattered around the city and beyond (permanent one next to Thai embassy), and most of them have Laughing Cow cheese spread on display. Bear in mind though that 90 % of the stands will NOT have cheese or veg – just typical pork stuffing. When we tried looking for one but couldn’t find it after navigating many streets – so just go along and if you see one – go for it.

We then went on to find a quiet (yet cheapish) place to sit down, have a drink and watch people, take photos. Most of the places seemed quite expensive. Many say Laos is cheaper than Thailand, but during our 3-4 trips in the same year the prices in Vientiane compare to Thai prices. Alcohol in Thailand was more expensive I used to think, but most bars, and even cafes compete with most parts of BKK! Coffee 100 baht, cakes 100-200 baht, beer 60-120 baht, small wine glass 120 upwards (mostly 200+). 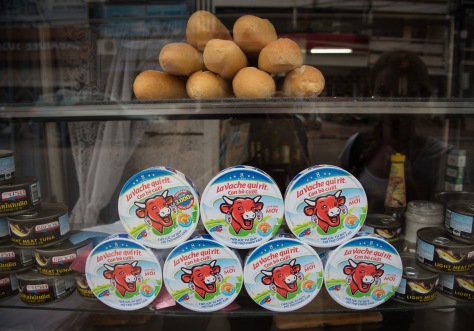 Auste struggled to recollect the location of the rooftop bar she went to last time, but we found it. If you stand between sets of flags with your back facing the river, turn your head to 10-11 o’clock and it’s the rooftop terrace with metal handrails. It’s called Bor Pen Nyang, Intercity Hotel. It’s a decent spot to see the sunset, people-watch from above, or enjoy some classic rock ballads (although we didn’t, haha!). The prices were better than anticipated, for both drinks and food. Dark Lao was 15k, and a glass of red was 25k (100 baht).

Looking over the Mekong we ordered a “cold bruschetta” with cheese and… sweetcorn! It was ok, for 25k. And also some French fries for 15k. Staff did NOT speak English. Although typically, if you point to your empty Beer Lao bottle and gesture 1 or 2 with your fingers, they would understand what you want! I can’t complain as they didn’t charge for one beer and one glass of wine! We ventured down the main road parallel the night market looking for a baguette as a midnight snack, but to no avail.

It was just nice to take a night stroll in the city centre, taking in the laid-back tuktuk offers (much more fierce in Cambodia), and passing-by youngsters on motorbikes playing loud Rihanna hits. We found a stand at Le Parisiens, and got a small cheese (little slice) and vegetable baguette for 10k kip.

Breakfast was good – I knew this was going to be the case, because last night we saw only European-looking elders checking-in (indicator of peace, reliability, AND a sign of pastries for breakfast). So we had scrambled eggs and a filling omelette, toast, fruit, real coffee, and… freshly baked croissants! For a moment I contemplated about what travelling vegans must feel like… Must be tough! 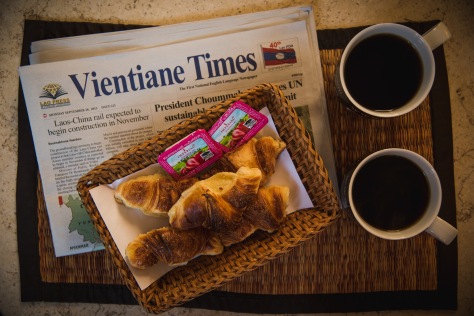 The following day we got lost on our way from the bus station (we walked to the Thai embassy), but further from the embassy (cross the road from pizza company and walk to the left) we found a few hip cafes, with hot lattes and cakes priced at 80 baht, sandwiches at 120 baht. We didn’t have time to try anything, but both the design and the menus looked appealing. There are loads and loads of cafes on pretty much every central street in Vientiane.

Yes, this place is good, and we went there again. We tried tofu patties and braised eggplant. While waiting for food I realised that I go on Sukhumvit road in Bangkok every day, and my nose in Vientiane got blocked more in one day. Haha. Eggplant was very tasty, but vegetarian pork chops – not so much. We actually ordered tofu patties as we don’t like fake meats, but they must have misunderstood our order. However if you like them, it may just be your thing! Texture was meaty, and how do they make such things from gluten is a fascinating mystery…

And a bigger mystery is WHY do they make such things? We think Asians love meat and eat fake meat for religion. We, on the other paw, love veg! The fake pork did cost us as much as a nice vegetarian meal in a fancy Bangkok restaurant. And the portion sizes were appalling – 3 slivers of eggplant in some sauce. However, we still give it a thumbs up (3 dishes out of 4 we tried in this place tasted surprisingly good). Vegetarianism is interesting.

Ok, this place is here only because of the sandwich stand. We had won some prizes from last night’s market games, so we downed them quickly and went for our baguettes. Man, they’re good! Cheese and veg 20k, full-sized veg baguette for 15,000 kip. Big beer 15,000 kip. Wine glass costs 35,000 kip though. We used to buy a couple of bottles of wine from Laos on visa runs as they’re cheaper at the duty-free. The sommelier place does have good interior design and good music, and is a nice sophisticated place to have a drink.

In general our highlight was the baguettes – you just can’t get them in Thailand, at least for cheap! Do note, however, that most of the sellers (like the sandwich photo at the top of the page, and above), only have meat options. Those baguettes though…

5 thoughts on “Our intensive vegetarian journey in Vientiane, Laos”