Last weekend we had our most disorganised trip ever. Last minute we decided we wanted to go away for the weekend, somewhere by the sea. It had to be somewhere close as we were only going for a couple of days, so we thought Pattaya will do. We’d read it’s one of the worst places in Thailand to go to, full of Russian tourists, crowded beach etc. But we thought, so what? It has a sea. It can’t be that bad.

On Friday we had a staff party (leaving do) at Loft in Love, lots of fun, and came back late. We had forgotten how tiring a party can be! The following day we felt so tired that we slept in, took forever to get ready, finally left for Victory Monument to try and find a van going to Pattaya, eventually did find it and got on. We didn’t have any maps or any idea where the van would drop us off in Pattaya (not like us at all!).

2 days earlier: late Thursday night, we were both sleepy, trying to book a place to stay on Agoda. We found this cheap apartment, but for some reason the map on Agoda refused to work, so we googled the place instead – it was right near the main beach! So of course we booked it.

And now it was Saturday evening, we had just got off the van in Pattaya. After looking around for street signs we realised it had dropped us off right in the city centre. Perfect! We thought we could just walk to our apartment. Until we looked at the map. This time Agoda’s map was working. And guess if our apartment was in the same place where google showed it to be…? It was right in the middle of nowhere. Far faaaar away from the centre. Far away from anything, really. We stopped a few taxi cars just to realise the ‘meter-taxis’ don’t even have meters in Pattaya! Of course they were all quoting extortionate rates. Even the price for a motorcycle taxi was just as ridiculous (150 each). Then we tried to ring the number on our booking to check if there would be anybody there to give us the keys – as it’s not a hotel with a reception. We tried ringing a few times – no answer. We decided we’d be better off losing the money we paid for the 2 nights and instead just finding a place that is REALLY in the city centre. So we ended up walking around Pattaya on a Saturday night, looking for a place to stay. Just like the travellers to Pattaya should be.

After walking into a few hotels and hostels we realised we’ll have to pay at least double of what we expected to spend (based on the price of our middle-of-nowhere apartment, ha ha) in order to get a place to sleep with no cockroaches. So we ended up paying loads, but found a really nice hotel to stay in. I guess I will never understand why people say it’s cheaper to find a place on the spot instead of booking online – for us it’s always been the opposite. Whenever we checked the walk-in prices, the same place and same room was cheaper online. And even in this case, even though we walked in and the staff showed us the room, we then made the booking online as it turned out to be cheaper. Maybe if you’re staying in dorms you might find places that are not online with lower prices, but for us – we always book a private room for the two of us, even in hostels, so the deals are always better online. And we like to be organised. I guess this experience just proved it to us that we need to organise our travels in order to make the most of the time that we have.

The next day we realised why people say that Pattaya is full of Russians. Russian signs, Russian restaurants, Russian tour guides, Thai waitresses speaking to the little kids… in Russian! Even the product range at Tops was adapted to suit the Russian taste. And… cucumbers with sour cream at our hotel’s ‘American breakfast’ buffet. SOUR CREAM in Thailand. Not to mention the fact that everyone approached us in Russian. At least that’s what it looked like at first. Then we realised there are plenty of Russians working there and they were the ones addressing us in Russian. Most of the Thais were speaking to us in English, but when they asked where we’re from they were still expecting to hear ‘Russia’. What a strange world.

What we didn’t expect though was to find just as many Indian restaurants and Indian tourists! Funnily enough, even the Indian restaurants had Russian snacks and meals on the menu… Just to be clear: we don’t have anything against Russians, it’s just that we don’t like when mass tourism changes the place so much that it becomes as foreign as the tourists themselves.

Anyway, the next morning we took a stroll along the beach to the main pier where we got on a ferry to Koh Larn island. What a difference: narrow streets with only a few motorbikes passing by, peaceful, quiet and pretty much empty. Tawaen beach might be different, but we didn’t go there on purpose – we got off at Na Ban pier and walked along the tiny streets seeing where they would take us. We found a tiny rocky beach where we spent a few hours just chilling, reading and having a small picnic. I have to say, Pattaya does look beautiful… when you look at it from a good distance! Then we found a really cosy café where we had a few iced drinks before heading back to the ferry. It’s just a shame we didn’t have more time to explore this lovely island. 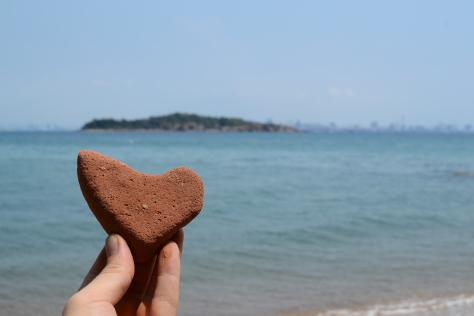 Back at Pattaya we went to the Horizon skybar on the 34th floor of Hilton. That is definitely a perfect place to watch the sunset – you have the whole coastline and Koh Larn island in front of you with the sun slowly disappearing behind the island’s silhouette. Simply beautiful.

And of course with so many Indian restaurants we just had to have an Indian meal. So we found a restaurant and couldn’t stop ourselves from ordering too much – we love Indian food. And everything we ordered tasted amazing. Everything. We could barely move after such a feast, but it was worth it.

So up until this point our opinion of Pattaya was not that bad. But if you want to scare yourself to death, go to Pattaya’s walking street in the evening. It looked bad enough when we passed it in the morning on our way to the ferry – the smell, the dirt and rubbish with all the adverts of thousands of bars all offering ‘pretty sexy girls’. Well, if that looked bad it’s a thousand times worse at night as it’s full of ‘pretty sexy girls’ offering themselves – when in fact most of them are not even girls! The funniest thing is that at the gate to this sex tourism walking street there’s a police van with about 5 officers sat at the table. I wonder what they’re controlling…?

Next morning, it was pretty cloudy and after breakfast it started pouring down – a proper tropical rainstorm. Luckily it stopped just before we had to check out. The flooded streets looked funny – especially the ‘pretty girls’ on the motorbikes trying to keep their high heels above the water:) we had another Indian meal before leaving and got a van home. Never sit at the back of the van. NEVER. The driver was going like crazy – we were flying past every single van, bus and car on the highway – all the time jumping up and down, as the road was that bumpy. We were so glad when we ‘landed’ in Bangkok 1,5h later and the driver had to slow down because of the traffic.

So actually you can have a nice weekend away in Pattaya. You can easily escape to the quiet Koh Larn (the ferry costs only 30 baht one way!), and even Pattaya’s beach itself is not as bad as we thought it would be – yes, it’s full of deck chairs but you can still find some space to just lay down on the sand and watch the colourful boats floating in the water. There’s plenty of good Indian restaurants and there’s a perfect skybar for the sunset. And it’s only 2 hours away from Bangkok – great for a weekend getaway. Just avoid the walking street and you’ll be fine.

2 thoughts on “Pattaya, Koh Larn, and the Russians”